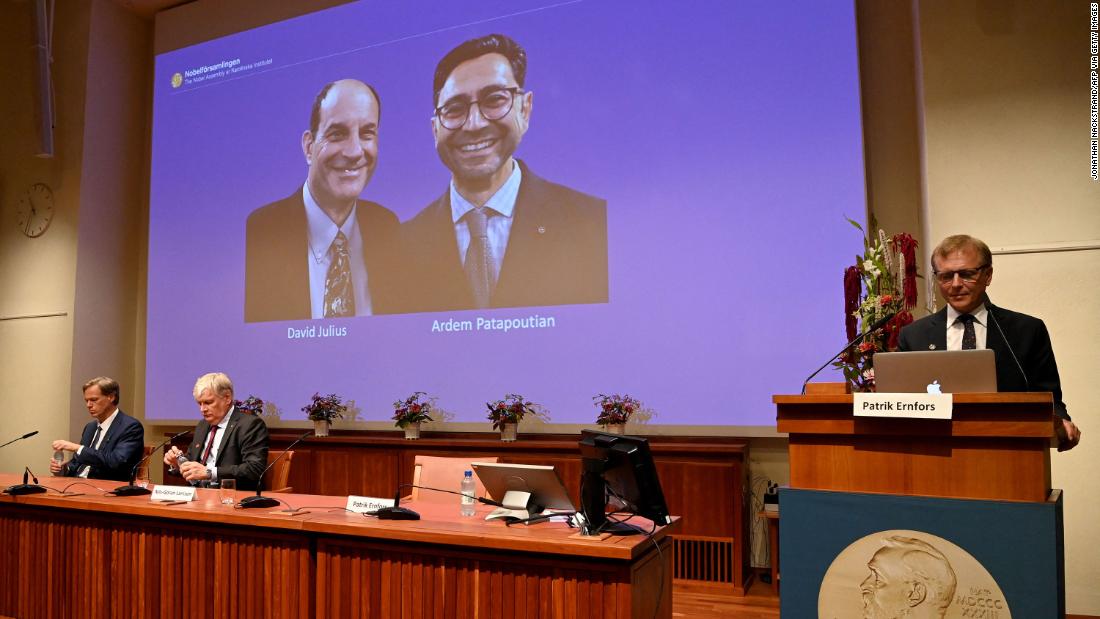 The two US-based scientists received the accolade for describing the mechanics of how humans perceive hot, cold, touch and pressure through nerve impulses.

“Our ability to sense heat, cold and touch is essential for survival and underpins our interaction with the world around us,” the Nobel Assembly said in a statement announcing the prize.

The discoveries will be vital to the development of treatments for chronic pain and other conditions, said Professor David Paterson, president of The Physiological Society in the United Kingdom.

“How we sense the temperature, touch and movement are some of the great questions for humanity,” Paterson said.

Thomas Perlmann, the secretary general of the Nobel Assembly, said the discovery “unlocks the secrets of nature … It explains at a molecular level how these stimuli are converted into nerve signals. It’s an important and profound discovery.”

The starting point for the pair’s groundbreaking discoveries was Julius’ work with the humble chili pepper — or more specifically, capsaicin, the pungent compound that causes a burning sensation when we eat the peppers.

“It was a very clever thing to do because chili pepper, or capsaicin in the pepper, was known to trigger nerves or pain. David Julius thought it could lead to a breakthrough if we really understood the molecular mechanisms for how this occurs,” Perlmann explained to CNN.

Julius and his team created a library of millions of DNA fragments corresponding to genes that are expressed in the sensory neurons which can react to pain, heat and touch. They then plugged genes from this collection into cells that do not normally react to capsaicin to find the single gene that caused the sensitivity.

Julius later realized this capsaicin receptor they discovered is also a heat-sensing receptor that is activated at temperatures that are perceived as painful, the Nobel Committee said.

“That was the route into these discoveries — the sensing mechanism for how nerves can actually be activated. When we encounter stimuli — temperature, mechanical, touch and pressure. The chili pepper was the handle but the discovery was much more profound than that,” Perlmann said.

Patapoutian’s work led to the discovery of sensors in the skin and internal organs that respond to “mechanical stimuli” that are felt as touch and pressure.

With his colleagues, he identified a cell line that reacted when its individual cells were poked with a micropipette. The team then identified 72 candidate genes that could be encoding receptors and “switched them off” one by one to discover the one responsible for mechanosensitivity.

Abdel El Manira, an adjunct member of the Nobel Committee for Physiology and Medicine, said the discoveries were made more than a decade ago but were particularly poignant given the coronavirus pandemic.

“It’s the right time (for it) to be recognized. It profoundly changed our view of how we sense the world … In the last year, we have missed our sense of touch — during a hug for example. These are the receptors that give us the feeling of warmth and closeness,” he said.

Mike Caterina, the Solomon H. Snyder professor of neurosurgery at John Hopkins School Of Medicine, worked with Julius in his lab as a post doctoral researcher in the mid 1990s when the first discoveries about capsaicin in chili peppers were made.

“It had been a holy grail in the pain field. People knew that this receptor existed but there was no molecular handle,” Caterina said.

“The sensation that we get when we eat spicy food is something so familiar and it has such a personal and cultural significance to so many people and everyone has a hot food story and everyone has experienced painful heat.”

“So for those two very tangible experiences to be explainable with one molecule is what really made that work exciting to us.”